Our Essay on the Internet for Indonesians 2011 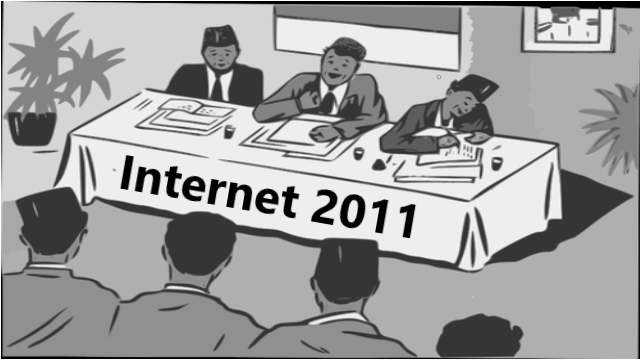 This is my undergraduate assignment that I translated myself in the Data Communication course, which was prepared so that readers in 2011 can find out how big the role and influence of Internet technology is in our daily lives. This assignment contains knowledge about the internet at large. Apart from me, our group consisted of Arya Putrawan, Dion Adi Putra, Vencysica Jeane, Sanita Eling Cipta Nesa, and Yulianti Murprayana. This task has never been published anywhere and we as the authors and the copyright holders license this task customized CC-BY-SA where anyone can share, copy, republish, and sell on condition that to state our name as the author and notify that the original and open version available here.

Nowadays computers can be found in almost every government office, company, school, or even household. The rapid development of computer technology, especially in the software sector, has made computers more user friendly and has made it a necessity for certain groups, such as businesses. In doing their work they are very dependent on computers. In the 20s, almost everyone knew and depended on the internet. Looking for information, communicating remotely instantly, entertainment can be accessed via the internet.

2.1 Definition of the Internet

The Internet is a global network of world computers, large and very broad where every computer is connected to one another from country to country around the world and contains various kinds of information, ranging from text, images, audio, video, and others.

The Internet itself comes from the word Interconnection Networking, which means the connection of many computer networks of various types, using communication types such as telephone, etc. The networks that make up the Internet work based on a set of protocols. standards used to connect computer networks and address traffic on the network. This protocol set the allowable data format, error handling (error handling), traffic messages, and other communication standards. The standard protocol on the internet is known as TCP/IP (Transmission Control Protocol / Internet Protocol). This protocol has the ability to work on all types of computers, without being affected by differences in hardware or operating systems used.

TCP (Transmission Control Protocol) is responsible for ensuring that all connections work properly, while IP (Internet Protocol) transmits data from one computer to another. TPC/IP generally functions to choose the best route for data transmission, choose an alternative route if a route cannot be used, organize and send data sending packets.

In order to participate in using the Internet facility, you must subscribe to an existing ISP (Internet Service Provider) serving your area. This ISP is usually called an internet service provider. You can use facilities from Telkom such as Telkomnet Instant, speedy and also other ISP services such as first media, netzip and so on.

Initially the United States Department of Defense (US Department of Defense) wanted to create a distributed computer network system by connecting computers in vital areas to solve problems in the event of a nuclear attack and to avoid centralized information, which in case of war could be easily destroyed. The first time it was used was the telegraph. Unfortunately the telegraph can only function optimally when the weather is good.

Another device that was used was computers in ancient times. At that time the exchange of files between the central computer and the terminal was possible. The longer the elapsed time the connection distance can be for the terminal and the higher the speed for the interconnection. But technology at that time was a strategic and military risk because there was no alternative route to communication if attacked. Therefore research was carried out between two physically separate systems and resulted in a packet switching model for a digital network. Labs used include Vinton G. Cerf at Stanford University, Donald Davies (NPL), Paul Baran (RAND Corporation), and Leonard Kleinrock at MIT and at UCLA. This research resulted in the development of packet switching networks such as ARPANET, Telenet, and X.25 protocol. But these gateways are still limited and they want to produce an internetworking protocol where many different networks can combine into a super-framework network. By using the internet protocol (IP) system, the idea of a global network called the Internet developed.

2.3 The Basic Structure Of The Internet And How It Works

The interconnecting network or the internet consists of hundreds of thousands of smaller networks that connect educational, commercial, non-profit, military and even individual organizations. This arrangement is called a server/client network. Client computers are computers that request data or services. The server or host computer is the central computer that provides the requested data or service. When a client computer requests information for various flights and ticket prices to the server computer, the server computer sends the information back to the client computer.

2.4 How computers understand data transmitted over the Internet

When your modem is connected to a modem at a POP ISP location, the two modems then go into the handshaking process, which is looking for the highest possible transmission speed. Then comes the authentication process: your ISP must know who you are by checking your username and password. You will definitely get these two things when you start subscribing to an ISP.

Although no one has the internet, everyone on the network must comply with the standards set by the International Board of Trustees of ISOC, Internet Society (www.isoc.org). ISOC is a non-profit and professional community of 100 organizations and 200,000 individual members in more than 180 countries. Organizations that are members of ISOC consist of various companies, government agencies, and foundations. ISOC is a forum for tackling internet problems in the future and is the basis for groups that play a role in developing internet infrastructure standards.

June 1998, the United States government proposed the creation of a series of non-profit companies to manage complex issues on the internet, such as fraud prevention, privacy issues and intellectual property protection. First is the International Corporation for Assigned Names and Numbers (ICANN), which was established to manage human-friendly domain names - that is, addresses ending in .com, .org, .net and others, in lieu of IP address numbers. to identify the type of website.

ICANN (which can be accessed at www.icann.org) is a global, private and not-for-profit company that does not have statutory authority and enforces policies through an inter members around the world. After receiving criticism for being inefficient, in 2003 ICANN became ICANN 2.0 which was increasingly responsive and active to become a reference for the world internet community in adopting standards. One of the improvements is the ICANN Whois Database which is able to display the name and domain address entered (for example, by typing microsoft.com, the name and address of Microsoft Corp. will appear). However, various groups including the International Telecommunication Union, an agency under the auspices of the United Nations, have alleged that the United States through ICANN controls the internet too much, and several countries have proposed the existence of an international institution as a replacement for ICANN. In July 2005, the United States confirmed that it would maintain its role in Internet governance.

2.5.1 Internet as a Communication Media

Several phenomena and the advantages of the internet as a medium of information and communication compared to other media. Information obtained is easier, faster and cheaper with global reach. This is supported by the fact that to reach as many as 60 million users: it took 30 years for radio, it took 15 years for television, It took 3 years for the web with applications: Email, WWW, NewsGroup, FTP Gopher, and others. Online media sites have sprung up (whether printed media or not) have reduced paper costs and distribution costs, for example: Newspapers on the Internet (Kompas Cyber Media), Seconds, Satunet, CNN, magazines, brochures, etc.

Dependence on the internet is starting to spread to big cities in Indonesia. Unfortunately not all of them have a positive impact, even so far internet users are more dominant in carrying out negative activities. In order to take appropriate action, it is necessary to have a clear and practical understanding of this unhealthy dependence on the internet. Addiction to the cyber world falls into five categories.

2.7 How Far Has the Internet Developed Until Now?

In 1989, Timothy Berners-Lee, a computer engineer from England created the World Wide Web, a kind of program that allows sound, pictures, movies, music to be displayed on the internet. It is because of this invention that the internet has become more attractive in appearance and very varied. Previously the internet could only be used by certain groups and with certain components. But now people who are at home can also connect to the internet using a modem and telephone network. In addition, the Internet is widely used by companies, educational institutions, government agencies, military institutions around the world to provide information to the public.

Apart from the above benefits, the internet also has a negative effect because the information on the internet is too free. So that it allows children to see various things that are not appropriate to see or read.

if you use the Internet Explorer browser. Then fill in the address of the site addressed to the Address. To find information quickly, use search sites such as: yahoo.com, google.com, e-smartschool.com or others. After entering the search site, enter the keyword (keywords) you are looking for.

The development of the internet and online games

Entertainment in the form of games accessed through cyberspace, Online Games, since its emergence has been very popular with Indonesian gamers. The types are increasingly diverse, with various challenges offered. From time to time since they first entered Indonesia and were introduced to the community, the development of online games has shown a very fast growth along with technological developments. Many Indonesian private companies then buy game licenses to be marketed in Indonesia. This trend has directly or indirectly influenced the growth of game centers in Indonesia.

Game Online Indonesia has entered a period of about 4 years with the launch of the first online game called Nexia by Bolehgame in early 2001. Many things have happened after that with the entry of several new game providers such as Ragnarok Online (RO) in 2003 which finally managed to make online games boom to its highest point, which caused chaos for Indonesia’s internet connection because the available bandwidth at that time was insufficient1. If starting at the beginning of online games entering Indonesia, it can be said that until now he has been around seven years old.

Internet is the development of media in the field of communication systems. The reach of the internet has reached the entire world (planet earth).