This is my undergraduate assignment that I translated to English myself in the Electrical Measurement course where the task is to write an essay on AVO Meters. This assignment has never been published anywhere and I, as the author and copyright holder, license this assignment customized CC-BY-SA where anyone can share, copy, republish, and sell on condition to state my name as the author and notify that the original and open version available here.

In this day and age (2011), the name AVO meter is familiar. Almost all households have an AVO meter.

Now every household cannot be separated from the use of electricity. In this modern era, almost all activities require electric power. Pumping water with an electric pump, cooling food and preserving it using the refrigerator, watching television, moreover at night you have to turn on the lights, all of that needs electricity. If there are problems with power tools, first look at the damage visually. If it doesn’t work, then you need an electricity measurement using an AVO meter.

Not necessarily everyone can use the AVO meter, maybe in a household, mostly only 1 person can use it and know what it is. Few also know how it works (only those who specifically learn about electricity).

The purpose of writing this paper is to explain to ordinary people about AVO meters and how to use them.

AVO stands for Ampere Volt Ohm. The meter here can be defined as a measuring instrument. AVO meter is a tool that can measure current (amperes), voltage (volts), resistance (ohms).

In this world, there are 2 charges, namely positive and negative charges. There is also a neutral charge, where the molecule has the same positive and negative power. If the load is like (++, –) will reject reject. When the charges are different (+ -) will be of attraction. The force that occurs between charges is called the coulomb force.

Electricity can be generated by flowing charges. Take the salt bridge, for example. The electrons flowing into the protons are called electric currents.

Current is defined as charge flowing in units of time.

To make it easy to understand the formula above, it can be said that the amount of coulomb that flows every second. The person who contributed to the discovery of currents was a mathematician and physicist from France, namely André-Marie Ampère.

The voltage in electricity can be said to be the amount of energy carried by each charge.

For easy understanding this formula can be said of the energy contained per 1 coulumb. The name of the volt comes from the Italian physicist Count Alessandro Giuseppe Antonio Anastasio Volta.

German physicist George Simon Ohm found that the voltage applied to an object is directly proportional to the current flowing. Each object has a different resistance.

Resistance is an electrical resistance which can be said to be the amount of voltage required to flow a current.

3. The arrangement of the galvanometer is as follows: 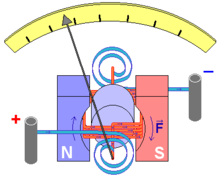 The ammeter arrangement is different from the explanation above.

4. Galvanometer works by entering electricity into it. After the electricity flows, it will produce a magnetic field that attracts the wire and attracts the spiral spring as well. So that the needle will rotate, and the spring will return it to normal condition after usage. 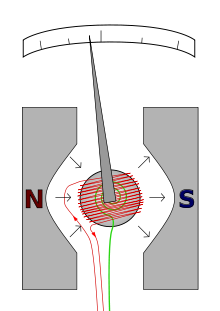 Ammeter works on the principle of water flow.

Demonstration model of a moving iron ammeter. As the current through the coil increases, the plunger is pulled further into the coil and the pointer turns right.

For the voltmeter, two poles are added to enter electricity. The goal is to measure the potential bed. Think of it like measuring water pressure.

For the ohmmeter the voltage will be given to the object to be measured its resistance. By applying stress, the resistance will be seen.

How to measure DC Voltage 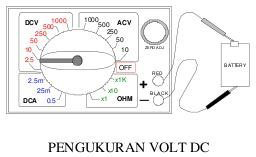 How to Measure DC Current

The way to measure current is somewhat different from measuring voltage, where the circuit for measuring current is installed in series with the load. Loads can be resistors, lamps or others.

The point of measuring resistance is to determine the condition of a component in a damaged or good state, and to determine how much the value of resistance is. Suppose a resistor has a color code: brown, black, red and gold tolerance means that the resistor has a resistance value of 1000 ohms with a tolerance of 5%, meaning that the resistor is still good if after measuring the value it is still between +/- 5% of 1000 ohms, or between 950 to 1050 ohms. How to measure it as follows: 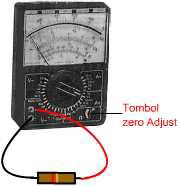 AVO meter is a combination of ammeter (ammeter), voltmeter, ohmmeter made into 1 tool. Tools that have varied functions, namely measuring current, voltage and resistance, are often termed a multitester. In fact, the author wants to explain in detail about the AVO meter. The real writer has the aim of explaining the definition, how to use it, how it works, so that the reader can make the AVO meter itself. By understanding how to make it the reader can repair it if it is damaged. However, it is unfortunate that limited time and knowledge prevent the writer from achieving this goal. Hopefully this assignment is useful for all who read and apologize if there are errors. In the end let me say thank you.