This is my undergraduate assignment that I translated to English in the Electric Field Theory course where my task is to write an essay on the Amperes Law and Magnetic Fields. Apart from me this group consists of Vencisisca Jeane R, Rr. Sanita Eling Cipta Nesa, Putu Arie Pratama, Fajar Purnama, Muhammad Audy Bazly, Muhammad Nordiansyah. This assignment has never been published anywhere and we as the authors and the copyright holders license this task customized CC-BY-SA where anyone can share, copy, republish and sell on condition to state our name as the author and inform that the original and open version available here.

Three genius scientists from France, Andre Marie Ampere (1775-1863), Jean Baptista Biot (1774-1862) and Victor Savart (1803-1862) stated that the force will be generated by an electric current flowing in a conductor that is between the magnetic fields. This is also the reverse of Faraday’s law, in which Faraday predicts that an induced voltage will arise in a moving conductor and cut across the magnetic field. This law is applied to electric machines, and the image below will explain this phenomenon. 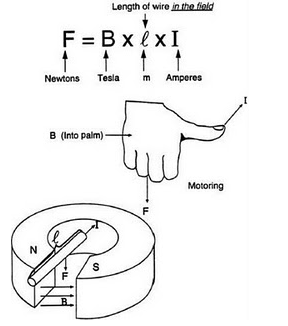 The problems raised in this assignment are as follows:

The main purpose of writing the assignment “Ampere Law and Magnetic Field” this time is to know and understand in detail about Ampere’s law and magnetic fields. The other objectives of this paper are:

The benefits obtained from the paper “Ampere Law and Magnetic Field” are as follows:

In this assignment, the scope discussed by the author is limited to the issues discussed, namely the Ampere Law and Magnetic Fields.

The magnetic field differential, dH is the result of the current element differential I dH. The field is inversely proportional to the distance (r2), is a free medium that is around it and has a direction which is the cross product of I dI and aR. This relationship is known as the Biot-Savart Law, where the equation can be, seen as below:

The direction of R must come from the current element at the point where dH has been determined, as in the following figure: 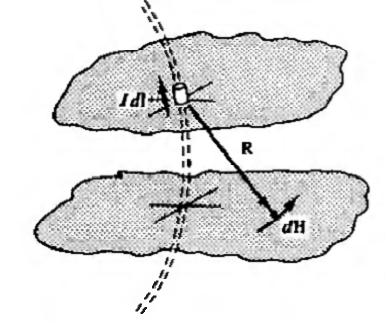 Current elements must not be separated. All elements complement the current filament contribution to H and the current must be involved. The integral form in Biot-Savart’s Law is as follows:

A simple closed integral requires all the current elements involved in obtaining the H.

Current I is long and straight along the z-axis of the cylindrical coordinates as shown in the figure below. 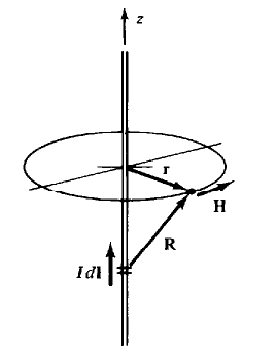 Without losing any of its general properties, choose a point in the z = 0 plane. Then in its differential form, it is as follows:

The magnetic field by surface currents and volume is also given by the Biot-Savart law of integral form, where I dI is replaced by K dS or Jdv respectively, and where the integral is taken over the entire surface, or volume, concerned. An important example is the current in an infinite plane with a constant density K. Where the equation can be seen as follows:

The line integral of the tangential component H along the closed path is equal to the magnitude of the current in the vicinity:

To be able to take advantage of Ampere’s law in determining H there must be a sufficiently high degree of symmetry to the problem being discussed. The two conditions that must be met are as follows:

The Biot-Savart law can be used to determine which path meets these conditions. But in most cases, the path is immediately visible.

Use the amperes law to get H by a long, straight current I. The Biot-Savart law shows that H is tangential and with the same magnitude along the circle in Figure 2.3, then the equation is as follows:

The curl of the vector field A is another vector field. Point P in Figure 2.3 is located in the area ∆S which is bounded by closed curve C. 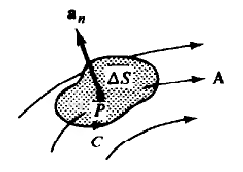 In the integration that defines curl, C is the area traversed by the curl so that the closed area is on the left. Normal units, determined using the rule of thumb, are as shown in the figure. Thus, the curl component of A in the direction an is defined as follows:

In the coordinate system, curl A is the fully specified value defined by the component along the three vector units. For example, the x component of Cartesian coordinates is defined by taking the contour line C of the square in the plane x = conts, via the point P, as shown in Figure 2.5: 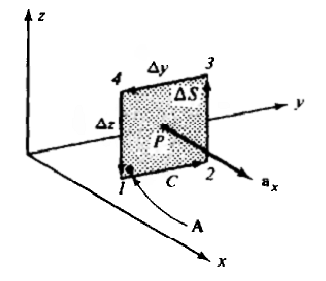 Figure 2.4 Curl on a Square

The third-order determinant can be written like the equation below, the expansion of which gives the Cartesian curl of A.

The elements of the second line are components of the del operation. This shows that ∇ × A can be written for curl A. As with other expressions of a vector analysis, this notation is used for curl A in other coordinate systems, even though × A is defined in Cartesian coordinates only.

The expressions for curl A at the coordinates of the cylinder and the sphere can be derived in the same way as above. Although, with a higher difficulty.

The frequency of use of the two properties of the curl operator can be explained as follows:

2.4 The relationship of J and H

In the law of amperes, the equation definition of (curl H) x can be written as follows:

This is one of Maxwell’s equations in the static electric field. if H is known for the entire region, then ∇ × H = J will produce J for the region.

which corresponds to the current of magnitude I in the + z direction which is evenly distributed over the cross-sectional area of πa2. Outside the conductor,

Like D, the magnetic field strength H depends only on the (moving) charges and does not depend on the medium. The force field with respect to H is the magnetic flux density B, given by:

Where = μo μr, is the permeability of the medium and the unit of B is tesla.

Magnetic flux Φ, which passes through a surface is defined as follows.

The sign can be positive or negative depending on the choice of normal direction on dS and the unit of flux is weber, Wb. The different magnetic units are linked by the following equation.

Determine the magnitude of the flux through the part of the plane ϕ = π⁄4 which is determined by 0.01 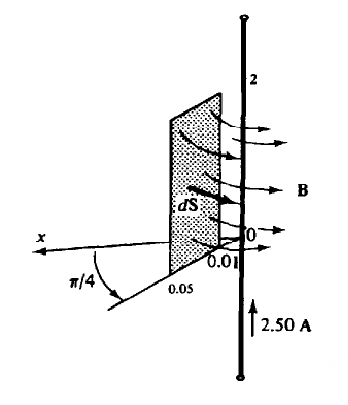 It should be noted that the magnetic flux lines Φ are closed curves (curves), which have no starting and ending points. This differs from the electric flux ψ which originates from a positive charge and ends up being negatively charged. As shown in Figure 2.5, all flux lines Φ that enter a closed surface will come out again from that surface. Therefore, field B has neither a source nor a hole, which is mathematically expressed by the following equation. 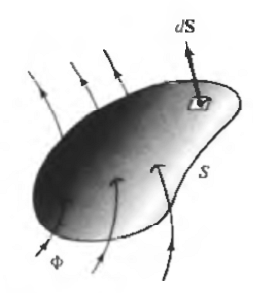 Initially, the electric field E is obtained from a known charge configuration. Later developed an understanding of the electric potential V, where E we see can be obtained as negative from the gradient, namely E = -∇V. Laplace’s equation then provides a means of obtaining V from the knowledge of the potential magnitude at the conductive boundaries. Similarly, the magnetic vector potential A is defined such that,

serves as an intermediate quantity, from which B and H. can be calculated. Note that the definition of A is consistent with the terms ∇. B = 0. The unit of A is Wь / m or Hm. If additional conditions are applied, then:

Then the potential vector A can be determined from the known currents in the area under study. For the three types of standard current configurations, the equations are as follows:

Here R is the distance of the current element at the point where A is to be calculated. As with similar integrals for electric potential, the equations for A above are based on the assumption of a zero price level at infinity; therefore, the previous formulas cannot be used if the currents themselves continue to infinity.

Check the magnetic potential vector for a long straight line I of current, in free space. 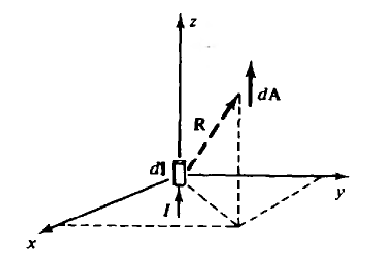 In Figure 2.7 the current is along the z-axis and the field points are (x, y, z). Also shown is a current element

At l = 0, where l is the variable that changes along the z-axis. It is clear that integral,

However, it is possible to consider a differential potential vector.

And obtain from it the differential B. Thus, by the special current element at l = 0, we have

If F is chosen to be the magnetic potential vector A, then Stokes’ Theorem can be formulated as follows:

The conclusions that can be drawn from this paper are as follows:

After the authors made this assignment, the suggestions that can be suggested are in performing calculations using the above formulas, one should properly master the concepts in their use, so that there are no fundamental errors in the process.