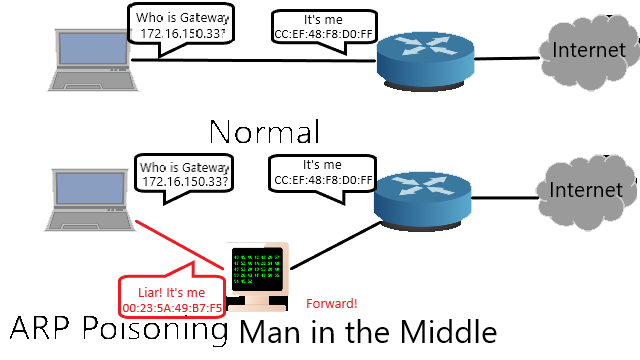 This is my undergraduate assignment that I translated to English myself in the Data Security Systems course where I was only assigned to write an essay on “man in the middle” but I was also interested in practicing it using Arpspoof and Wireshark applications on Linux. Apart from myself, our group consists of my colleagues Yulianti Murprayana, I Made Dwi Angga Pratama, Muhammad Audy Bazly, and I Nyoman Arta Jaya. This task has never been published anywhere and we as the author and copyright holder license this assignment customized CC-BY-SA where anyone can share, copy, republish, and sell it on condition to state our name as the authors and notify that the original and open version available here. If only interested in the practice, just follow the video.

Wireshark is a software for capturing packets passing on the network called packet sniffing. Sniffing itself means smell, used by dogs to catch traces. Wireshark is not shown to do hacking but as a traffic monitoring and hacking detector software, meaning that it is a software to monitor traffic conditions so that it can detect if there is a breach or something unusual on the network. However, Wireshark can also function as a hacking software.

Wireshark captures all passing packets, meaning that the username and password that is sent is captured. If you are connected to the network and you can find out what other hosts are connected, it is possible to kill the activities carried out by that host, namely by using ARP (Adress Resolution Protocol) poissoning and sniffing. In this assignment, we will try to capture a host’s username and password to various web addresses using a combination of scanning, ARP poissoning and sniffing methods.

Can we capture usernames and passwords on other hosts that are connected to the same network by scanning, ARP poissoning and sniffing?

To find out the capture of the username and password by scanning, ARP poissoning and sniffing to elearning.unud.ac.id.

NMAP is an open source software that functions to scan the network. NMAP uses RAW IP (Internet Protocol) packets to find out whether there is a host, services provided by the host, see firewalls or filters, and the type of operating system used. Although NMAP is made for scanning large networks, NMAP is also good for checking 1 host (Lyon, 2013).

Packet sniffing, or packet analysis, is the process of capturing data across a local network and looking for any information that might be of use. Most of the time, we system administrators use packet sniffing to troubleshoot network problems (such as finding out why traffic is so slow on a part of the network) or to detect intrusions or compromised workstations (such as a workstation connected to a remote machine on port 6667 continuously when you’re not using an IRC client), and that’s what the type of analysis was originally designed for. But, that hasn’t stopped people from finding more creative ways to use the tool. The focus quickly moved away from the intention so much that packet sniffers were considered native security tools rather than network tools today (Hannah, 2011).

3.1 Place and Time of Experiment

The following are the tools used for research:

The following are the materials used for research:

The first thing to do is to see the IP configuration when entering a network that is DHCP (Dynamic Host Configuration Protocol) with the command “ifconfig”. 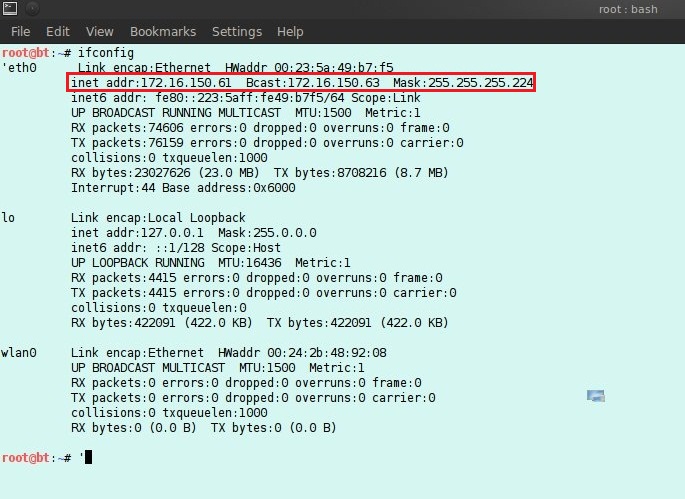 In this assignment, sniffing is done with the open source software Wireshark and captures packets on the eth0 interface (cable). 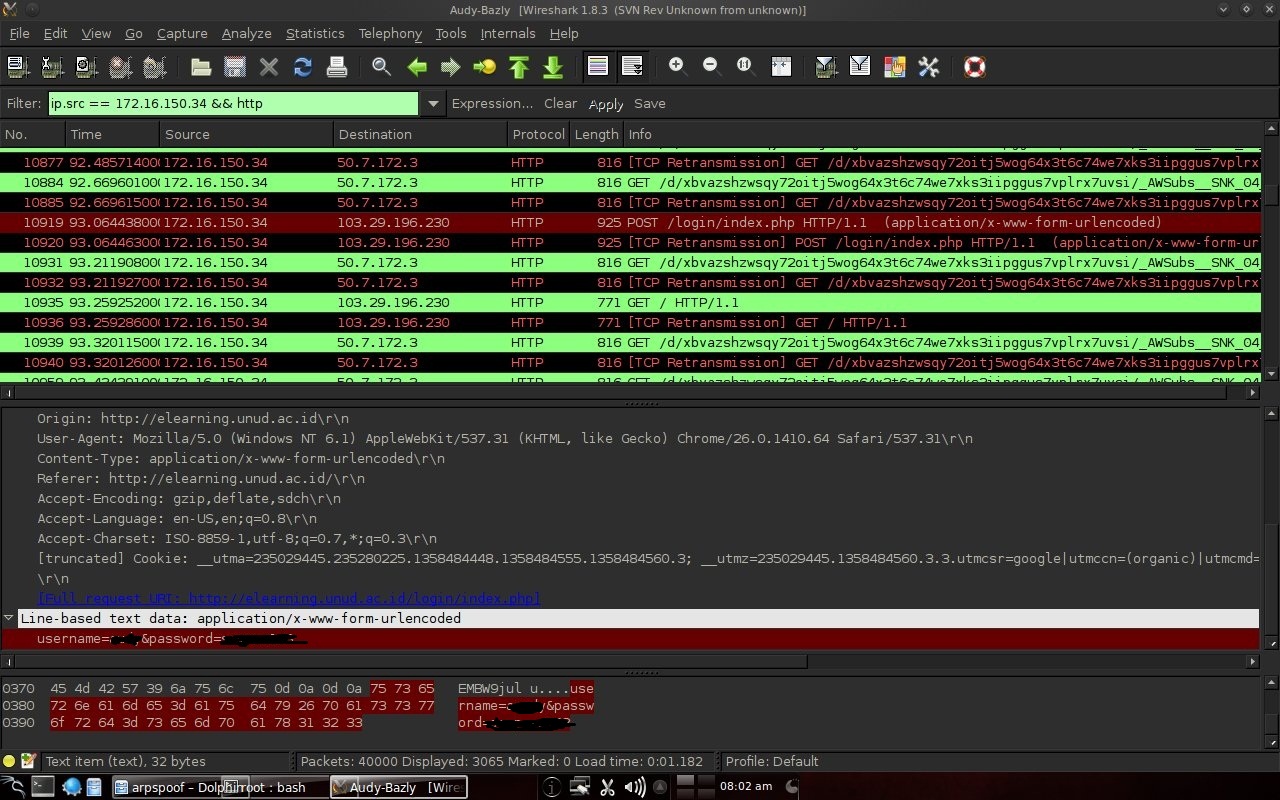 To make it easier to search for login results, filter it with only packages originating from 172.16.150.34 and only http types are displayed. To log in usually use a form. Seen in Figure 3.4 source 172.16.150.34 is experimental material and destination 103.29.196.230 is elearning.unud.ac.id. The login protocol type is http. Username and password appear probably because of missing encryption.

In arpspoof Figure 3.3 is modifying the ARP table where gateway 172.16.150.33 with the mac address CC:EF:48:F8 D0:FF (seen in Figure 3.2) is changed to 00:23:5A:49:B7:F5 in Figure 4.1. This means that the default gateway is changed to the computer that is doing ARP poisoning. So that the experimental material computer will send the package via the computer that does arpspoof first. With ip_forward enabled, packets will be forwarded to the gateway as if there was no disconnection.

Capturing username and password can be done by scanning, ARP poissoning and sniffing information contained in the packets that passed. From the experiment it appears that there is no encryption on the username and password in the package to elearning.unud.ac.id, blog.unud.ac.id, simak.ft.unud.ac.id. However, there is MD5 encryption on kaskus.co.id so it is not easy to see the password. In the experiment, scanning used NMAP software, ARP poissoning used Arpspoof software, and sniffing used Wireshark software. With this combination, it can monitor the activity of other hosts on the local network.

This paper can be used as further research with hosts having different operating systems, using other software, or a more in-depth discussion of the methods used.