This is English translated assignment of my undergraduate Telecommunication Network course in the Department of Electrical Engineering, Faculty of Engineering, Udayana University where in the final semesters I am often given research writing assignments. As far as I remember, the reason I took this topic was because at that time I often played DOTA locally with ten of my friends where our laptop was connected to a HUB device and LAN cable. This task has never been published anywhere and I as the author and copyright holder, license this paper customized CC-BY-SA where anyone can share, copy, republish, and sell it provided that you write my name as the author and notify that the original and open version available here.

DOTA (Defense Of The Ancient) is a multiplayer game with a LAN (local area network) system. Maximum game 12 people with a maximum of 10 players and 2 spectators. For example, to play 10 players, you need 10 PCs (Private Computers) connected to a LAN (local area network) (on the same network). Now this game can be played online. Each computer connected to a LAN (local area network) will send traffic (data flow) on the network. The amount of traffic depends on the game which is DOTA (Defense Of The Ancient) in this case. Not many people know how the performance of a network when playing DOTA (Defense Of The Ancient) with ten players (10 PCs). In this experiment, the traffic generated by 1 PC (private computer) to play DOTA is examined. After that, a simulation of 10 PCs (private computers) based on the traffic generated on OPNET is conducted

How is the performance of a network when playing DOTA (Defense Of The Ancient) ten players (10 PCs)?

To observe the performance of playing DOTA (Defense Of The Ancient) with a simple OPNET LAN (local area network) system.

To know the performance of playing DOTA (Defense Of The Ancient) with the OPNET LAN (local area network) simple system and can be used to consider the technology that must be used.

Ethernet collisions are usually based on CSMA/CD (Carrier Sense Multiple Access / Collision Detection). CSMA (Carrier Sense Multiple Access) is the ability of a host to detect whether a channel is empty or has traffic. If it is empty the host will continue sending data, and vice versa when there is traffic, the host will wait until it detects an empty new one to send. However, it does not apply if there are 2 hosts both detecting an empty channel. When this happens both of them will continue to send data together so that a collision occurs. Therefore, Collision Detection is needed. Besides being able to inform the host that a collision has occurred, there is also a Back-off algorithm where the host will wait based on various calculations before resending data (Peterson, 2003).

Material is the traffic generated by a PC (Private Computer) when playing DOTA (Defense Of The Ancient) on a LAN (local area network). OPNET uses 10 Ethernet Station, 16 Port Ethernet Hub and 100 Base T ethernet cable. Here is a list of devices used:

3.3.1 Looking for the traffic generated by the PC when playing DOTA via LAN

1. Connect 2 computers in a LAN as follows:

2. Use wireshark on one PC (Private Computer) to record the traffic generated. 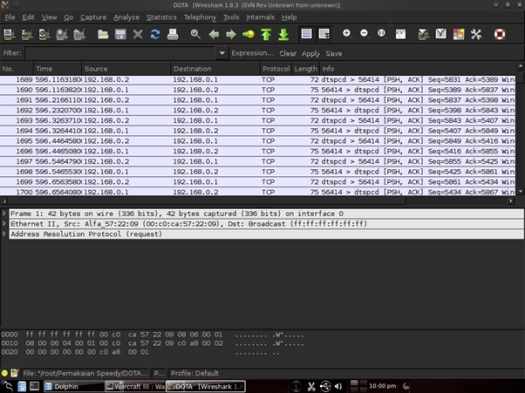 3. Do 1x DOTA (Defense Of The Ancient) game until it’s finished. 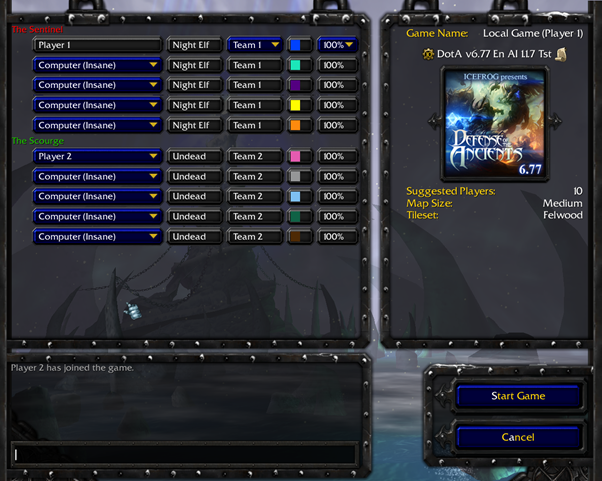 3.3.1 Simulate with OPNET the performance of DOTA 10 player games

1. The network topology is as follows (distance in meters): 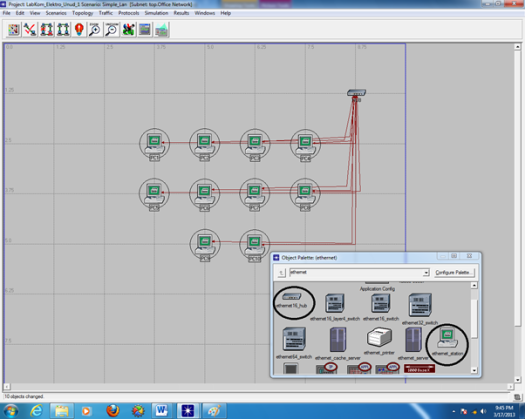 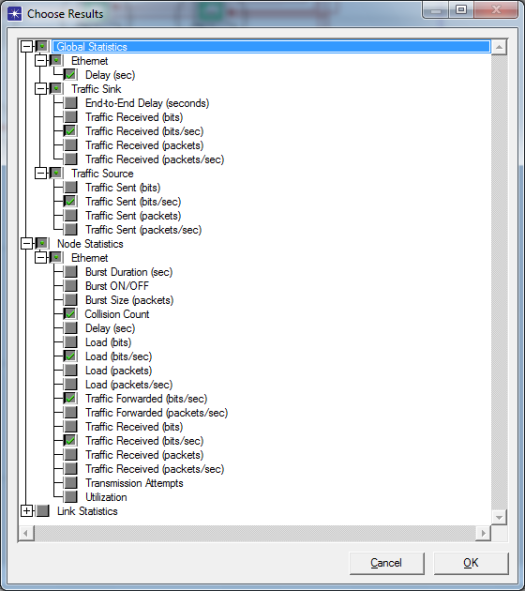 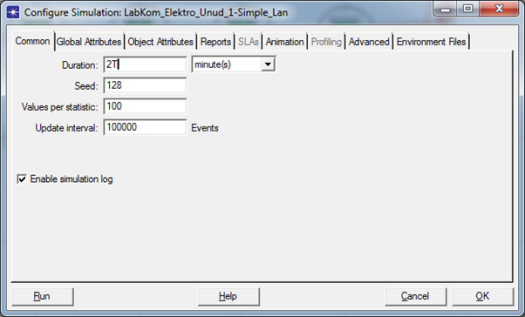 Figure 4.1 The resulting graph on the wireshark

By using the options on the Statistics menu, IO Graph. The following graph is generated where the horizontal axis is minutes, and the vertical axis is bytes/second. This graph shows that the traffic generated on 1 PC (Private Computer) is 100000 bytes/second. Meanwhile, the line with the highest value (close to 200000 bytes/second) is the overall traffic. (sent and received).

So in the simulation each ethernet station is set to generate traffic of 100000 bytes/second. Network starts to live at the 5th second, the network is on for 120 seconds (ON Time), Never turns off (0 OFF Time). To make it more real, the packet is sent every 0.01 second (not per second) with a 1000 byte (1000 bytes/0.01 second = 100000 bytes/1 second) packet. The settings are as follows (by right clicking one of the PCs, selecting similar nodes, right clicking again, then selecting attributes): 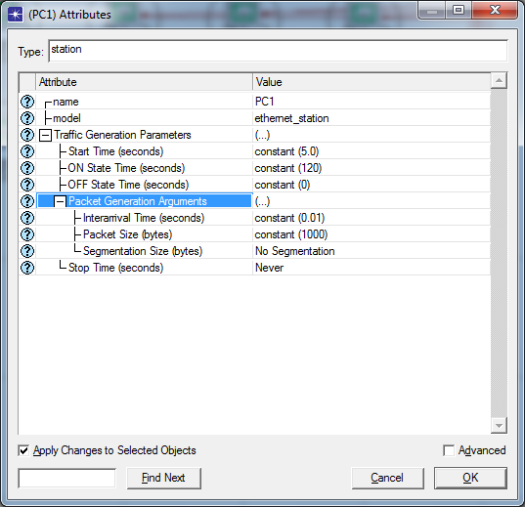 Figure 4.2 Settings for each ethernet station 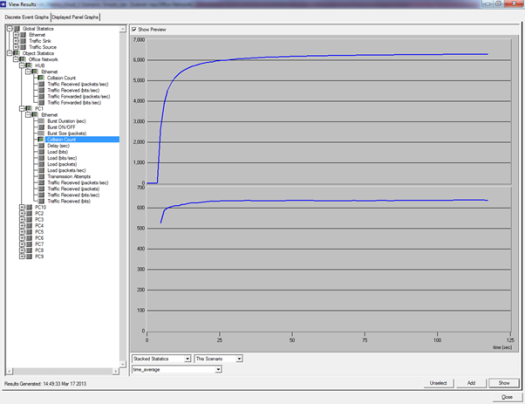 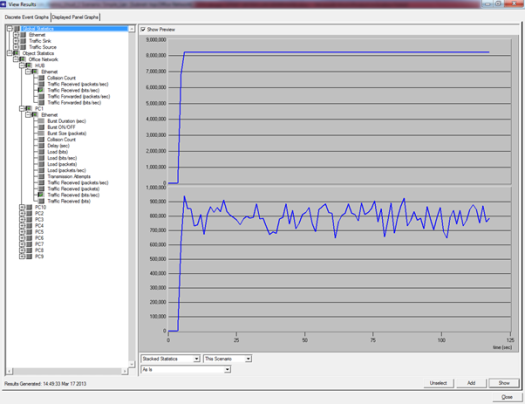 This experiment is limited to a simple LAN. It could be used as further research by implementing client - server systems, with different network configurations, or other things.