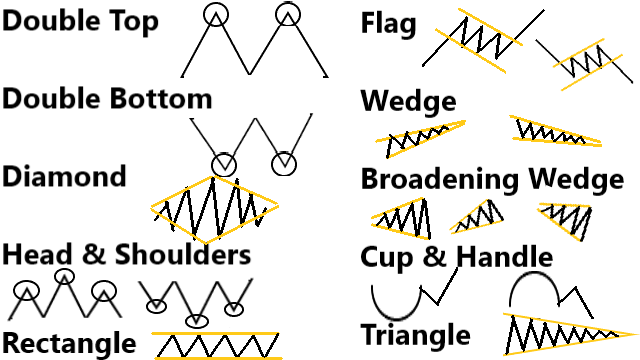 Reversal classic chart pattern are pattern that reverses the trend where if currently the trend is bullish then the trend will reverse to bearish and vice versa. In many articles, these patterns are not the first on the list but I decided to list them here first because new traders when starting their technical analysis education usually forgets about these patterns. The cause is the default instinct of starting learners where they always draw trend lines whenever trying to spot a chart pattern. The fact is that most these popular reversal patterns are not identified by trend lines but by support and resistance lines. Therefore, engrave these patterns into your head first.

Unlike other reversal patterns, the method of spotting is to draw lower and upper trend lines. Initially, the pattern expands potentially a broadening wedge pattern. However, the next pattern does not continue to expand but contracts instead like a symmetrical triangle pattern. Finally, a reversal occurs and the diamond pattern is complete.

To spot a head and shoulders is to check the supply area. The swings should form 3 mountains where the middle mountain is the highest which is the head, and the other 2 should be the shoulders. When the last swing breaks far below the previous wells, then the head and shoulder pattern is complete. 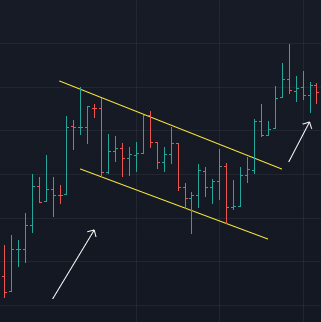 After drawing upper and lower trend line on a bullish corrective phase and found the lines seemed parallel, try drawing a parallel channel. If most of the swing fits then it is most likely a bullish flag. Really, it looks like a flag. Many traders place a buy order above the upper trend line where they believe the price will continue the bullish trend when the price breaks the pattern. 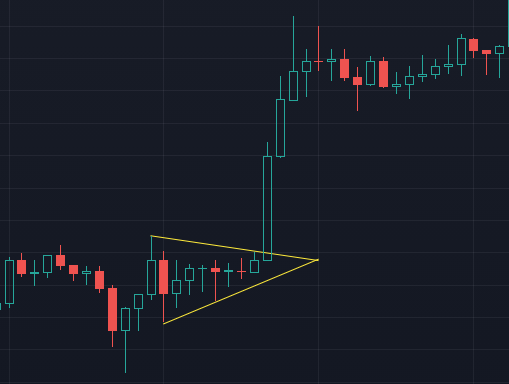 A bearish pennant is a pennant pattern occurs during a bearish corrective phase.

Unlike pennants and triangles, rising wedge converges but both lower and upper trend lines goes into the same upper direction. Theoretically, the price will break the upper trend line and continues its bullish trend. The detailed swings maybe seen as separate impulsive and corrective phase but zooming out, the broader picture can generally be a corrective phase.

Unlike other popular continuous patterns, cup and handle uses supports and resistance to identify. The swing should at least be similar to “V” where there is a bottom and two tops on similar prices. The rounder the bottom like a “U”, the more likely a cup to be valid. The handle usually corrects at most 50% and very rarely reaches 75%. After the bullish trend continues, the cup and handle pattern is formed.

Unlike wedges, lower and upper trend lines goes in different direction but converges but unlike pennant, it forms a wave. Triangles are longer than pennant. Triangle is the most popular classic chart pattern on social media today.

This is an example that a symmetrical triangle can go bullish.

This is an example that a symmetrical triangle can go bearish. 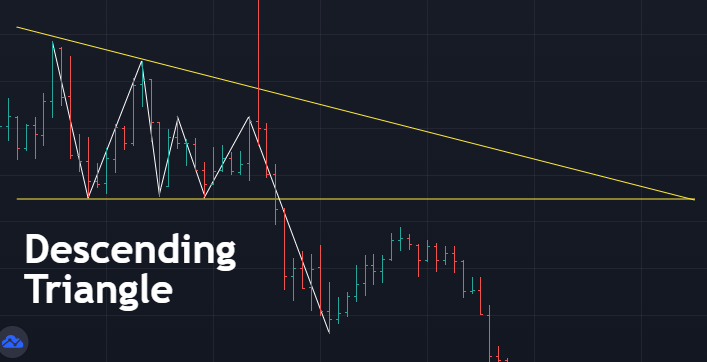 An inverted symmetrical triangle and a wedge that can go either ways.

Both the lower and upper trend lines are horizontal where at the same time they are support and resistance lines. A prime example of a sideways trend. Usually it starts with a double bottom and a double top that continues forming more tops and bottoms at the same trend line.

Not only Peter Schiff and other Bitcoin skepticism are calling for an immediate Bitcoin fall when recently a head and shoulders pattern seemed to form, but Bitcoin supporters as well such as Robert Kiyosaki intending to buy more Bitcoin in $24000 level. Many analyst made a more accurate analysis that Bitcoin will correct to $40000 first before it falls to $24000. Three times that Bitcoin failed to break above $40000 and four times Bitcoin bounced $29000. Finally, it failed to fall below $29000 and made it back to $50000 which finally invalidates the head and shoulders pattern.

While chart patterns are one of the best for presentation and sharing technical analysis to the public, correctly identifying and profiting from chart patterns are different things. In live trading, fail chart patterns does not occur more often than a changing chart pattern. For example, when we though a falling wedge is forming, instead it breaks upwards. We may mistakenly identified a bullish flag as a falling wedge. First the previous trend or impulsive phase is bullish. A falling wedge usually occurs after a bearish trend of impulsive phase. Second, drawing the trend lines on the candle shadows is not the only way. We can draw trend lines on the closing price or simply use a line chart which may show a bullish flag instead of a falling wedge. Another example is a that we make a quick assumption when a double bottom or a double top formed when a rejection occurs on the same line but it is not formed yet and instead may return and break the line. Therefore, to predict a forming chart pattern better is to go back to the basics of swing, trend, support & resistance, and supply & demand, know popular candle stick patterns, use technical indicators, and never forget the DOW Theory.