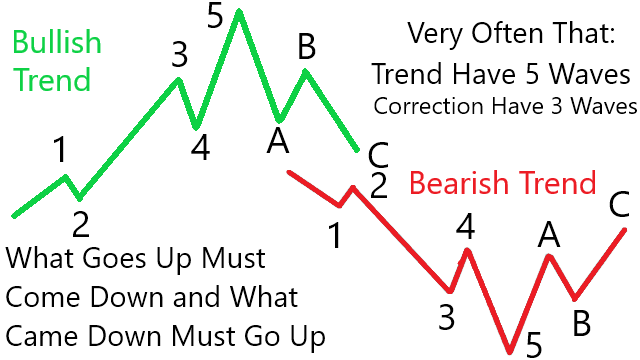 Up to the Harmonic Pattern Chapter 7, we only examine up to 3 waves (2 impulsive and 1 corrective). In this chapter, we will discuss up to 8 waves of the Elliott Wave. Ralph Nelson Elliott eventually found that the market traded in cyclic pattern. What goes up must come down, and what went down must go up, or up, down, up, and down. He also found out that most price action are affected by traders’ psychology. When a price is going up, many traders will want to take a ride (participation phase), when the price went up too much, early traders will want to take profit (after excessive phase), after that late traders will start panic selling, and after everything went down new traders will want to buy cheap (accumulation phase). As I always preach every where about trading, “it does not matter what the truth is, what matter is what people believe”. Remember when a journalist wrote that I double spend occurred on Bitcoin and the price crashes? In the end, experts review and verified it to be false, fake news, misinformation, or just misunderstanding of the journalist who is not really a developer, programmer, nor technician. “This event really proofs that people does not care about the proof, they care more about what people say, if not then they believe what they want to believe”. Sounds like the DOW Theory right? Well, the Elliott Waves are said to be the more mathematical details about the DOW Theory.

Elliot Wave predicted the Bitcoin crash on May 2021. Even before the Ellon Musk suspended Bitcoin Payment in Tesla and China sweeping ban of cryptocurrency, Elliott Wave traders are already cautious of the 5th Elliott Wave which is the end of that time’s bull market. While reguler traders are bullish of the forming classic chart pattern rising wedge, Elliott Wave traders are bearish of the forming ending diagonal. When Ellon Musk announced the suspension of Bitcoin payment, the price crashed breaking the rising wedge and for Elliott Wave traders was the confirmation of the 6th wave. They waited for the small pull back of the 7th wave and finally took profit before the China widespread ban leaving the panic sellers behind. Most who are new to crypto on that period was in despair after the 8th wave formed. Now, let us summarize some important points of the Elliot Wave:

While the theory states that waves must not overlap with other waves at anytime, but does candle shadow counts? The AVAX chart above showed that the candle shadows overlaps where many believed this invalidate the Elliott Wave. However, do you know that $1000 trade on small coins can impact more than 10% of the price? Yes, this is called low market cap where anyone can draw the chart as they want. Which is why for low market caps, it is recommended to rely on closing price than candle shadows. Back to the chart, if closing price where line chart is used, then the waves will not overlap, making the Elliott Wave valid. Do not forget as well that the 3rd Wave does not need to be the longest but cannot be the shortest.

The Elliott Wave on AVAX chart is an intermediate cycle and the one on BTC chart is a primary cycle. Here is a gold chart which is a super cycle that can last for decades. If we can get the gold price data from the early Greek times, we may find a grand supercycle which lasts for centuries.

However, Elliott Wave does not have to be long time frame. For example here on CAKE chart, an Elliott Wave is found that lasts only a few weeks which can be categorized as a minor cycle. The following are the degrees: